It is not easy for small not-for-profit spaces and non-commercial groupings to show in an art fair. Launched in 2005, Art Projects has established itself as one of the most exciting sections of London Art Fair attracting widespread critical acclaim and a distinct audience. Art Projects has now been a major part of London Art Fair for eight years and  is a destination for those looking to discover emerging talent. Established as one of the most exciting sections of the Fair, Art Projects features solo shows, curated group displays and large-scale installations with galleries from across the world. 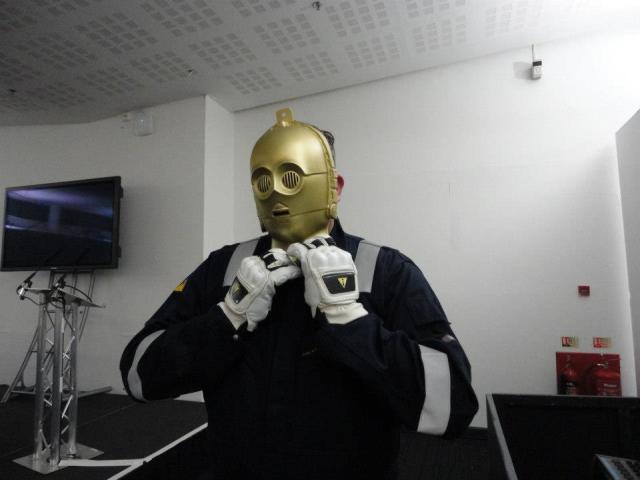 ALISN (the Artist Led Initiatives Support Network) have taken the radical approach of occupying a space shared by no fewer than seventeen of the three hundred cash-poor but imagination rich artist led organisations in the country. Called ‘Sublet’ this entry into the fair was organised by the Deptford gallery run by sculptor Iavor Lubomirov and painter Bella Easton.  One example of the work on display was a Live Art Performance called SPAM by Tom Estes in which he the artist fell asleep while wearing the mask of a protocol droid.

In Estes’ work, audience members are asked to interact with the performance by taking pictures on what the artist calls a “communal camera”. The pictures are then posted on social networking sites for another, wider on-line audience. This is what Estes refers to as ‘Harnessing The Hive’ – as the view of the central performance is mediated and digitally recorded through machines. 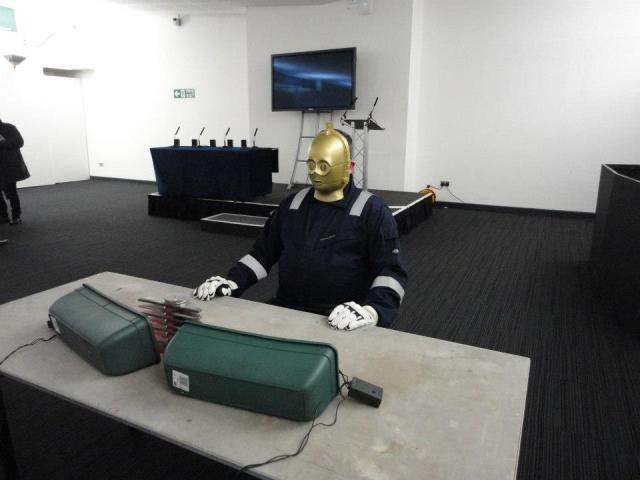 Much of Estes work anticipates the on-line reduction of life to a single image. So the interaction of the audience, and their digital recording of the performance becomes more than mere documentation and can be seen as central to the work. The audience, rather than being some kind of privileged, passive witness becomes an active part of the performance and the creative process. This role reversal invites the audience to re-examine easy assumptions, received opinion and current social and critical trends as well as question the ways in which we see and understand our world and culture.

Estes’ principle concern is how our view of life is increasingly mediated by machines and the digital as a shaping condition and structuring paradox. While machines enable us to do things they also do things to us and do things at us. We are being completely enveloped by abstract systems and inundated with information that we are struggling to come to terms with. The internet favours private, unconditional, sovereign freedom over scientific, conditional and institutional freedom. And yet at the same time cyberspace is becoming an increasingly efficient tool of surveillance with which people have a voluntary relationship. But whatever may be said about the internet one thing remains certain- as a primary means of global communication the internet is resulting in a massive social transformation.

Julia Alvarez’ Deptford gallery Bearspace is a regular at the Fair, and  exhibited, amongst others ‘Penumbra’, the latest series by Suzanne Moxhay. She uses a combination of found images – the National Geographic is a favourite source – and model making to construct what are effectively her own small scale designs for film sets. She photographs and digitally manipulates these so that the miniature merges with the epic and it is hard to tell the real space from the illusory. The resulting environments, as she says, ‘exist in a space between various intersecting fields of representation while embodying a reality of their own’, in this case inspired by exploring the edgelands of London, where small patches of wilderness encroach on the man made environment, creating strange juxtapositions of the natural and urban.

Curated by Pryle Behrman, Art Projects 2013 captures a snapshot of the current practice and provides an important critical and commercial platform for contemporary art galleries in London at the start of the year. The Fair’s curated showcase of the freshest contemporary art from across the globe features large-scale installations, solo shows and group displays, while the Art Projects Film Programme hosts a selection of experimental film and video work.

1 Response to Art Projects at The London Art Fair 2013