Visual Echo: A Study of Objects & Bodies In Motion 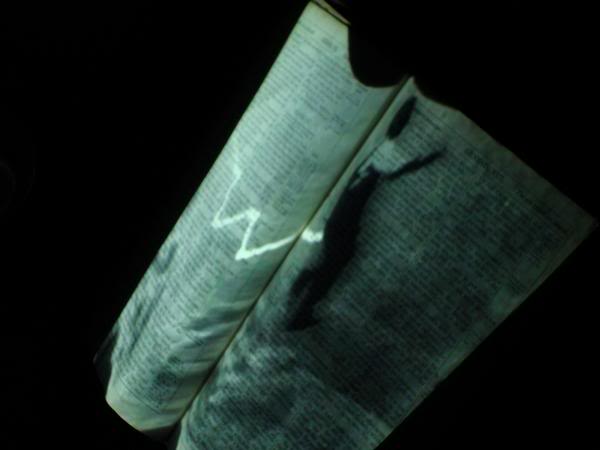 From chronophotographic developments, cinematography and silent film of moving images were invented. In the work Blitz, contemporary digital artist Tom Estes reverses this process turning film back into photography.  Blitz, depicts an individual being thrown through the air by a lightning bolt. Even the medium itself, a series of photographs, suggests speed, as a recording of ‘live’ split second action’. Estes’ slapstick comedy is a deliberate mitigation of surrealist shock but with the mad attention urges of a Play Station gamer.

Photography is an art and science which was invented and developed beginning in the 1830s. Initially, it was used as a documentation device – for portraiture, historical moments, battles in war, and so on. With how rapidly the technological and artistic world began to develop, new uses and ideas for the camera also began to develop. With the invention of the camera, art no longer necessarily had to capture life. The camera became the dominant source of accurate depiction of life. As the technology became more sophisticated, so did the activities for which people needed cameras.

As early as the 1860s, a few photographers were making “moving pictures” by taking photographs of a subject in a series of poses simulating phases of motion, then using various devices to display them one after the other in rapid succession. This stop-motion photography technique was necessary because the photographic materials available at that time were not sensitive enough to permit the very short exposures needed to photograph subjects that were actually moving. Improvements in the sensitivity of photographic emulsions eventually made true real-time chronophotography possible.

In the late nineteenth century, a photographic technique called chronophotography began to develop, whereby multiple photographs would be taken in rapid succession to study the movement of a given subject. Eadweard Muybridge famously filmed a horse in motion in 1878, providing the world with its first taste of motion pictures when the images were displayed on a spinning zoetrope. In 1872, Leland Stanford, former governor of California and horse enthusiast, hired Eadweard Muybridge to provide photographic proof that at some instants a galloping horse has all four hooves off the ground. Muybridge lined part of a racecourse with a row of cameras that had shutters connected to a series of tripwires, then photographed a horse against a white background as it galloped past. One of the resulting silhouette photographs provided the desired proof. Later in the decade, with the benefit of more sensitive photographic plates, he obtained greatly improved results. Muybridge also arranged such sequences of photographs in order around the inner surface of a zoetrope; when the drum-like device was set spinning, an observer looking through its slots saw an animated image. The images of the horse caused astonishment to the public, as no one had seen such precise documentation of the movement of the animal. Muybridge was subsequently commissioned to photograph a variety of other moving subjects

Several years later, the French physicist Etienne-Jules Marey developed a stunning variation of this technique when he captured multiple poses of a subject over time onto a single frame of film, rendering a kind of visual echo. The nature of this process limited the subject matter to that which could be photographed in a black studio using stark lighting, to prevent overexposure of the background when multiple images are layered over one another.


“Choros” is an experimental film steeped in tradition, modernizing “chronophotography” a visual echo technique developed for scientific study in the 1880s. Spellbinding and uplifting, Choros is a reminder that dance, music, and indeed, cinema can sometimes transcend words altogether.

The film”Choros” revisits these technical innovations and attempts to contribute original innovations of its own. Directed by Michael Langan and Terah Maher with music by Steve Reich, a chorus of women are borne from the movements of a single dancer in this dreamlike “pas de trente-deux.””Choros” premiered at Clermont-Ferrand International Short Film Festival in 2012 and has gone on to play dozens of festivals worldwide. The film is currently broadcast in Europe by Canal+

Using recent advancements in digital compositing, the technique developed for “Choros” introduces color, frees the film from the confines of a black studio, and allows the dancer to linger in one position without risk of overexposure, resulting in a variation of this historical technique that allows a degree of subtlety heretofore prohibited by technical limitations.

Chronophotography’s original purpose was to help scientists study objects in motion, primarily humans and animals. It was also used for practical purposes, such as judging timed events and recording historical ones (horse and dog races, performances) and studying the movement of projectiles for war. With Anschutz’s development of non-scientific, entertaining chronophotographs, chronophotography became the basis for the invention and development of cinematography.

Due to the development of projection devices, (the zoetrope, Muybridge’s zoopraxiscope, Anschutz’selectrotachyscope, and ultimately, Albert Londe’s high-speed multi-exposure camera which ran film through a projector in a new way), the display of chronophotographs as entertainment became more sophisticated and useful than ever before. Before long, cinematic devices spawned from original chronophotographic predecessors, with which audiences could watch continuous loops of entertaining activities (for example, the “peep show” devices built using Thomas Edison’s backlighting technology which showed mildly smutty films). From these developments in history, cinematography and silent film of moving images were invented.

Art Selectronic is an artist-led initiative, that supports grass-roots contemporary art that remains unswayed by fashion, trends or the whims of government funding. The project involves ongoing research into the placing of contemporary art, it’s audiences and it’s relationship to the everyday. We place great emphasis on context. Our mission is to support new works of contemporary art and foster an audience from a wide range of backgrounds.
View all posts by Art Selectronic →
This entry was posted in Uncategorized and tagged Choros, chronophotography, Laundromat-Locomotion, Michael Langan, Steve Reich, Steven Pippin, Terah Maher, Turner Prize. Bookmark the permalink.