Stranger Than Fiction: Dreaming Your Way Out Of Disaster 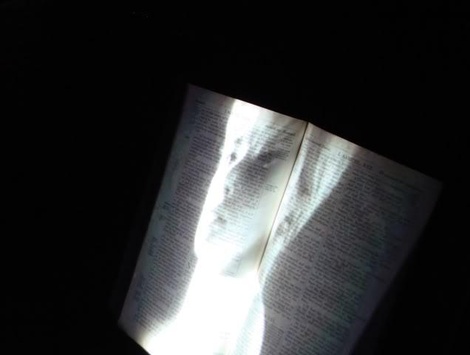 Annunciation by artist Tom Estes. The title of the work ‘Annunciation’ is a Biblical term which means the announcing of ‘the incarnation’ or a materialization of the unrealized in a concrete form. The work therefore relates to multiple worlds; possible, fictional or desired worlds which though different from the one we live in, directly influences our own.

English poet, painter, and printmaker. William Blake (28 November 1757 – 12 August 1827) claimed “Do what you will, this world’s a fiction and is made up of contradiction.” Likewise The Society of the Spectacle (French: La Société du spectacle) is a 1967 work of philosophy and Marxist critical theory by Guy Debord. In this important text for the Situationist movement, Debord traced the development of a modern society in which authentic social life has been replaced with its representation: “All that once was directly lived has become mere representation.” Debord argued that the history of social life can be understood as “the decline of being into having, and having into merely appearing.”

For artist Tom Estes “fantasy and illusion are not a contradiction of reality, but instead an integral part of our everyday lives”. And apparently there is scientific research which suggests a firm grounding to this as the very basis of our society. A new study published in the July issue of Cognitive Science suggests young children who are exposed to religion have a hard time differentiating between fact and fiction.

Researchers presented 5- and 6-year-old children from both public and parochial schools with three different types of stories — religious, fantastical and realistic –- in an effort to gauge how well they could identify narratives with impossible elements as fictional. The study found that, of the 66 participants, children who went to church or were enrolled in a parochial school were significantly less able than secular children to identify supernatural elements, such as talking animals, as fictional.

By relating seemingly impossible religious events achieved through divine intervention (e.g., Jesus transforming water into wine) to fictional narratives, religious children would more heavily rely on religion to justify their false categorizations.“ In both studies, [children exposed to religion] were less likely to judge the characters in the fantastical stories as pretend, and in line with this equivocation, they made more appeals to reality and fewer appeals to impossibility than did secular children,” the study concluded.

Refuting previous hypotheses claiming that children are “born believers,” the authors suggest that “religious teaching, especially exposure to miracle stories, leads children to a more generic receptivity toward the impossible, that is, a more wide-ranging acceptance that the impossible can happen in defiance of ordinary causal relations.” According to 2013-2014 Gallup data, roughly 83 percent of Americans report a religious affiliation, and an even larger group — 86 percent — believe in God. More than a quarter of Americans, 28 percent, also believe the Bible is the actual word of God and should be taken literally, while another 47 percent say the Bible is the inspired word of God.

Artist Tom Estes grew up in an Irish Catholic family with a strong religious set of beliefs. in the second half of the 20th century. So he has a first hand experience of the effects of religion. However, this utopia of the Cold War period was darkened by anxiety and competition. Estes, like most people in the 20th century was gaining a knowledge of an incredibly complex, changing world. The conviction was that it had lost control over its own creatures. Technology became far too complicated to be comprehensible for the average user and thus the suspicion of these machines having their own soul and will was born; and media was gathering, selecting, mixing, warping or amplifying information so that “reality” became inapproachable.

Estes was often inspired by scientific achievements and technological development, be it about cities for future societies, the info communication revolution, or the arms and space race. Quite antithetical future possibilities, such as discovering an intelligence ultimately superior to that of human race (like in 2001: Space Odyssey) or facing a society totally devoid of culture and human sense (such as in Fahrenheit 451); conquering the universe and vacationing on the Moon or perishing in a nuclear attack by the evil “Other” all seemed to be at arm’s length and approaching.

Live Art Performance EMOTICON by Tom Estes for Communication Futures at The Old Royal Naval College during DRHA 2014. In his performance Estes stages an ‘action’ and then ask members of the audience to take pictures on a communal camera. In this way, the audience becomes part of the performance, and the pictures are then posted on on-line social networking sites and web sites for another, wider on-line audience.

In his practice, artist Tom Estes creates photographic ‘installations’ that introduce a  kind of artwork that functions more as art proposal for a partially realized exhibition; a document of visual and spatial modes of presentation that theorizes a different approach. But in his practice Estes also has acute observations on Science Fiction. Thus, exact scientific facts and precise, inanimate machines, social tensions and political ideologies or phobias, filter through his fantasy, and artistic creativity, turning into peculiar, in some cases optimistic, in others threatening or even apocalyptic visions of late modernity. This science-fiction universe is at the same time the summit and the collapse of the modern utopia; it shreds and pulps fact and fiction so that the unknown and the foreign comes near and the familiar turns uncanny; irrational becomes the principle and logic gets nonsensical; and the unthinkable somehow enters our consciousness.

Some SF themes, like nuclear threat and havoc, are still with us, as the political situation they articulate has not changed as much as leading ideologies maintain; however, if SF as language and method has entered visual art in the past as well as today, the reason might be that it proved suitable for articulating the uneasy relationship of past and future, known and alien, threatening and fascinating, scientific and phantasmagorical – not as opposites, but as intertwined entities.

Inspired by Pop Art’s interest in popular culture such as sci-fi, and searching for magic and wonder, Estes states:

“My work, like science fiction, is a sort of thought experiment. SF has long served as a useful vehicle for “safely” discussing controversial topical issues and often providing thoughtful social commentary on potential unforeseen future issues. Science Fiction in its purest form takes a scientific principle, poses a question or hypothesis about that principle and then explores the effects of that principle on society and culture. But in recent years science and technology have begun to catch up with science fiction. So many of the fantasies and illusions of the past are no longer a contradiction of reality, but instead an integral part of our everyday lives. As well as referencing SF in my work, I use new or existing technologies. For example, within our new world of digital inter-connectivity, more and more representation and therefore our understanding of the world takes place on-line. Much of my Live Art performance and Installation work anticipates the on-line reduction of life to a single image. Through my work I explore how the digital image can be considered an event that spills out from its initial structure into an expanded field of activity.”

Speculative Fiction is an increasingly vocal critic of Neo-liberalism, amid gaping economic inequality and environmental crisis. The prevalence of these themes is no accident. If inequality is a common motif, its source (capitalism) and its cure (collective action from below) are often muted or completely ignored. There are voids left by an increasingly fractured social framework whose coherence is faltering thanks to rampant privatization, economic deregulation, ubiquitous social risk and day-to-day precariousness.

Capitalism can give us a false sense of the world outside our own. In the 1988 film The Truman Show starring Jim Carry, the character Christof has invented a means to prevent Truman from discovering his false reality by dissuading his sense of exploration. Yet despite Christof’s control, Trueman manages to behave in unexpected ways. Estes’ work inserts itself into these de-territoralized spaces, not with the aim of niche marketing or product loyalty, but rather at gaining surreptitious entry into media visibility itself. Yet despite any of their shortcomings, these new works exhibit a refreshing willingness to question dominant elements of our economy and social life.

As Ray Bradbury put it, “Science fiction is any idea that occurs in the head and doesn’t exist yet, but soon will, and will change everything for everybody, and nothing will ever be the same again. As soon as you have an idea that changes some small part of the world you are writing science fiction. It is always the art of the possible, never the impossible.”

Tom Estes will be exhibiting  a new work  in London for One plus One, Curated by Iavor Lubomirov for LUBOMIROV / ANGUS-HUGHES

For more information go to http://wsimag.com/art/17962-one-plus-one

Tom Estes will also be exhibiting photographic pieces in the north of England at an exhibition to open the new Bulb Contemporary on November 28th 2015.